Homily: 21st Sunday A. Key Symbol of Authority for Service

The word of God this Sunday brings out the idea of a key as a symbol of authority. How does this word challenge, and at the same time, exhort us in the different ways we exercise authority? 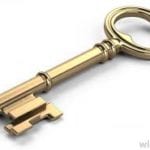 This Sunday’s gospel touches one of the points which have been quite sensitive in the relationships of the catholic church and other churches -the papacy. From this text Catholics understand the ministry of the pope as the continuation of the authority that Jesus entrusted to Peter. Other churches have a different interpretation. While this bonne of contention stands, however, here we choose to centre our reflection on: in which way does this text challenge and inspire us in the way we exercise authority as Christians?

What’s happening in the Gospel is like Jesus wants to check things out. Crowds of people have been following him. However, for him, a massive following alone is not enough. He wants to see: are these people on the same wavelength with him? That is, are they seeing things in the same manner, especially regarding his mission as messiah? Isn’t it likely that the disciples also think like any other Jew of their time, and thus, they await a politically powerful messiah who will liberate them from the foreign, colonial power of the Romans?

That is likely to influence both their motivation of following him, as well as what they expect from him. No wonder Jesus takes the disciples apart to exchange with them. He asks them first about what people out there are saying about him, and then, a personal question: “But who do you say that I am?”

We shouldn’t approach this question simply as a biblical account of a past event.  This soul-searching question is freshly addressed to each Christian today: who is Jesus to you? What do you expect from him?

A key given to Peter

Peter is entrusted with the key. But what is a key? It’s an instrument which serves to open and to close. It’s a symbol of authority. But the implication of closing and opening power will depend on how it’s used.

You can open to let the people in, and you can close to keep secure those who are inside. However, you can also close to shut out, as a way of excluding just like you can open to throw out. Hence, the real meaning of the key, symbolic instrument, will depend on how much we appreciate and embrace upon ourselves the messianic attitude of Jesus in his dealings.

In fact, in the Middle Ages you had caretakers entrusted with keys of the visitors’ rooms. Their responsibility was to ensure that visitors had everything they needed during their stay. Here we can get some insight into the mission of Jesus as messiah: it’s about service and taking care -he’s a shepherd. Consequently, whatever authority we exercise in the name of Jesus, certainly, is not about power to rule but care giving.

Unlike a ruler concerned about making his power felt and protecting it, on the contrary, a caretaker or a shepherd it’s the well-being of the people entrusted to him that counts as first priority. That brings us to another self-introspective question: in my responsibility, whatever the form, am I a ruler or caretaker (shepherd)? That’s the matter in the first reading.

What’s happening in the first reading? Shebna, the prime minister of the king Ezekias is thrown out of the post and is replaced by Eliakim. He executes his functions not for the well-being of the people but for his own political career, even to the point of endangering their security. Such attitude goes against what God expects of those called to be leaders of his people. Indeed, what the text says about Eliakim is quite revealing as what God wants.

This new minister, Eliakim, shall be a father to the people. This falls in the same sense as being caretaker or shepherd to the people.  If we take this as mark of contrast, then, we can say that Shebna has probably been, more than anything else, a ruler concerned about his power and political machination to protect it. Here again, we are not interested in history but in the application of this word in our lives today.

Isn’t there in us a Shebna, a manipulator, and a self-centered politician? On the other hand, Jesus is calling us, in whatever we do, to blossom the Eliakim in us, that is, to be fathers and mothers to one another especially to those entrusted to us.

4 thoughts on “Homily: 21st Sunday A. Key Symbol of Authority for Service”